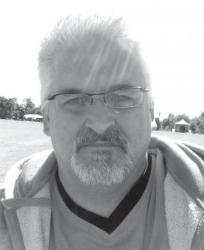 John Richard (Rick) Buckle, age 55, of Kiowa, Kansas was born August 4, 1962 in El Dorado, Kansas. He passed away suddenly on June 2, 2018. Growing up Rick’s family moved around several times, living in Kansas and Oklahoma. His favorite things to do as a young man were playing pinball, skateboarding, and dating his future wife, Rebecca Garrison. Rick graduated from Eureka High School in 1980. Rick and Becky then went their separate ways, but would later be reunited. After high school, he held several jobs before beginning his career as a professional truck driver, earning several awards. Rick was married to Debbie LeRoax from 1986 to 1997 and to Michelle Buckle from 1997 to 2005.Rick and Becky were reunited and married on March 18, 2006. Rick chose to end his trucking career to be closer to home. He then attended WSU earning a bachelor’s degree. After earning his degree, he became an employee at Western Equipment in Alva, Oklahoma. Rick was a beloved husband, step-father, and “Grandpa B.”, never missing an opportunity to spend time with his family. He will be remembered by all as a kind-hearted, fun-loving, and generous man. He was passionate about life and lived it fully. Some of Rick’s passions included Formula 1 racing, sports (especially Australian football), and politics. Rick was preceded in death by his parents, Tom and Gertrude Buckle.He is survived by his wife, Rebecca (Becky) Buckle of Kiowa, Kansas; sister, Vicki Romig of Valley Center, Kansas; one niece; two nephews; one step-son, Ryan Harris and wife, Becky of Quinlan, Texas; two step-daughters, Gayle McNett and husband, Tyler of Kiowa, Kansas and Melanie Fritts of Shawnee, Kansas; six grandchildren and one great grandchild. Memorial service for Rick was held Saturday, June 9, 2018 at 11:00 a.m. at the Congregational Church in Kiowa, Kansas. Arrangements are by Lanman Funeral Home, Inc. of Kiowa, Kansas www.lanmanmemorials.com Facebook: Lanman Funeral Home Inc. Memorials may be given to the American Cancer Society through the funeral home.