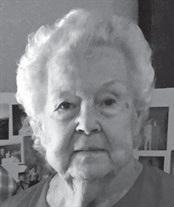 Nadine (Book) Jones, passed away Thursday, August 16, 2018 at Greenwood County Hospital in Eureka, Ks. Nadine was born at the family home in Fall River, KS on January 15, 1929 to John and Lela (Tyner) Book. On April 27, 1949 in El Dorado, KS, Nadine married Clifford Jones. Nadine and Clifford were life-long partners for 69 years until his death in May 2018. After High School, Nadine was an office clerk for many different companies during her life, and retired from the Army Corps of Engineers after working there more than 20 years. She was a talented musician, as she could play the piano, fiddle, accordion, and guitar. She loved to play for country dances held around the area. During her stay at the Eureka Nursing home, she began playing Bingo with the other residents. She loved it so much, she continued making daily trips back to the nursing home after she moved to an apartment, just so she could play Bingo with them. Most of all, her greatest joy were her friends and family. Nadine is survived by: Son: Don and wife Frankie of Douglass, KS; Daughter: Sharon Eade of Eureka, KS; 11 Grandchildren, numerous Great Grandchildren; and 1 Great-Great Grandchild. Nadine was preceded in death by her parents, 3 children: Marlin Wayne Jones, Donna Aliene Foulke and Roger Dean Jones, 3 sisters: Margaret Smith, Waneta Scharff, and Bonnie Wiedrick. Funeral Services will be held Monday, August 20, 2018 at 2:00pm at Countryside Funeral Home in Howard. Visitation will be held on Sunday, August 19, 2018 from 4pm to 6pm at the funeral home. Memorials have been suggested to the Army Corps of Engineers and may be left with or mailed to the funeral home. Online condolences may be left at www.countrysidefh.com. Services are entrusted to Countryside Funeral Home, 206 E. Washington, PO Box 1233, Howard, KS 67349