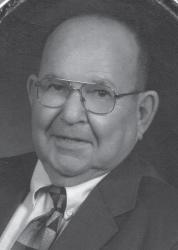 Known by most as “Tiny,” Everett Duane Wilnerd lived nothing short of a giant life. Everett started that life on August 7, 1934, being born to parents Odes and Nellie (Earlly) Wilnerd outside of Norton, Kansas. Everett qualified as a state wrestler while attending Norton Community Schools, from which he graduated in 1951. Upon graduating, he first earned the nickname “Tiny” while working for the State of Kansas Regional Highway Department. It was during this period that Everett met the “catch” of his life, Fort Hays State student, Carolyn Ann Base. Everett then joined the U.S. Army from 1954 to 1956; he was stationed in Germany for almost a year. After returning from Germany, he immediately took two giant steps: First, he rejoined the Highway Department and second, he got “hooked” on October 27, 1956 to then teacher, Carolyn Ann Base in Pawnee Rock, Kansas. To this union, a school of seven fish were hatched, including two sets of twins: Susan, Craig & Carol, Lauri, Amy & Andy, and the youngest fry, Scott. Upon leaving the highway department, Everett joined the crew at Gall Motors in Norton as a mechanic. But “Tiny” had bigger fish to fry and game to hunt; which is what led him to Jetmore, Kansas where he began his love long career as a game warden with Kansas Fish and Game; today known as Kansas Wildlife and Parks. He and his family were later transferred to Howard, Kansas where Everett was given the territories of Elk, Chatauqua and part of Greenwood counties to patrol. During his career, Everett was known as a man of justice, fairness, and kindness by those he ticketed and those he taught. One of his greatest joys was to teach Hunter Safety Courses for young and old alike. He is fondly remembered for his humor, his many escapades with other officers and the public, and the infamous “robo” deer. After retiring in January 1997, Everett and Carolyn began traveling and became heavily involved in various activities like those with the American Legion, the Howard United Methodist Church, Elk County Kids Wrestling, Kansas Peace Officers Association and scoping out garage sales. After a lengthy recovery period, Everett died peacefully on September 4, 2018 in Eureka, Kansas. Everett was preceded in death by his parents, his step-dad, Dallas Johnson, his son, Scott Wilnerd, and daughter Amy Kitchens, Sisters Mildred Catlett and Joyce Alley, brothers-in- law Lanny Harvey, Larry Base, and Gene Alley, sister-in-law Vi Base, and sons-in-law Joseph Galvan and Carl Kitchens. Survivors include wife, Carolyn of the home, daughters Susan Galvan and Carol Hernandez, both from Howard, KS, and daughter Lauri Brownfield of Blanchard, Iowa, sons Craig (Tracillia) Wilnerd of Wichita, Kansas and Andy Wilnerd of Kansas City, Mo., brother-in-law Steve (Elva) Base of Owasso, OK and sister-in-law Betty Harvey of Garden City, Kansas, 10 grandchildren, and 19 great-grandchildren and a host of nieces, nephews and friends. A Celebration of Life Service was held Saturday, September 8, at 11 a.m. at the Howard United Methodist Church with Pastor Kibum Kim officiating. A visitation was held on Friday, September 7 from 5-7 p.m. at Countryside Funeral Home. The family suggests memorials to Carter-Rader Post #149 and the Howard United Methodist Church. Online condolences may be left at countrysidefh.com. Services entrusted to: Countryside Funeral Home 206 E. Washington, P.O. Box 1233, Howard, KS 67349.